The next review will probably be up next week.
Posted by Amy at 4:25 PM No comments:

No, I didn't run out of movies yet or anything. I just happened to find the novelization of the pilot episode of Angel for $1, read it, and thought it'd be good to review. In an unexpected turn of events, I was able to get my camera to behave so that the video and audio in my video footage is finally in sync--which hopefully means I can start using more than 10 seconds of video per review in the future--but the audio was misbehaving terribly. You win some, you lose some.
I haven't finished doing the captions for this episode yet, but once I do I'll upload it to YouTube.
Posted by Amy at 12:11 PM No comments:

As promised, my next review: Bram Stoker's Dracula!

I didn't get into as much detail in this one, but about halfway through writing the review I realized I didn't have much to talk about. "It's boring" was my general assessment, and since that's more of a holistic thing it's hard to find an example of any particular moment that was boring. But to illustrate, normally I take pages and pages of detailed notes as I read, whenever I hit something that 1) I should note in the review or 2) I just personally found interesting. My notes for Bram Stoker's Dracula were about a page and a quarter long.

Anyway, I will read a few more novelizations and pick one that's actually good for the next episode. I don't want to turn into a review shows that only reviews bad things; plenty of other shows do that already.

Just finished up my series on Star Wars movie novelizations for About.com. (There are a great many more adaptations of the six Star Wars films, of course, but one thing at a time.) Here they are, in order from worst to best:

6. Episode V: The Empire Strikes Back by Donald F. Glut is just... pointless. There were too many changes made between the screenplay used for the novelization and the final movie -- in particular, the dialogue between Han and Leia -- and the novelization adds nothing that wasn't in the movie. Possibly worth reading before ESB came out on home video, but certainly not now. 1.5/5 stars.

5. Episode II: Attack of the Clones by R.A. Salvatore definitely tries, including a lot of additional material that wasn't in the movies. Most of it is dull, however, and makes the novelization drag. If you want the extra material, watch the deleted scenes on your AotC DVD, but don't bother with the novelization. 2.5/5 stars.

4. Episode I: The Phantom Menace by Terry Brooks gains half a star just for the opening scenes with Anakin and the way it develops his character beyond what's possible on screen. The rest of the novelization is just average, however, and the poor action scenes drag down the ending. 3.5/5 stars.

3. Episode IV: A New Hope by Alan Dean Foster is definitely the best novelization, stylistically, of the Original Trilogy, and it does a good job integrating background information to develop the universe. On the other hand, it fails to develop Darth Vader as a serious and frightening villain, which damages the story considerably. 3.5/5 stars.

2. Episode VI: Return of the Jedi by James Kahn has a lot of stylistic problems, including glossing over a lot of the action (a major fault of movie novelizations as a whole). However, this is redeemed by the added scenes and the way the the novelization gets inside Darth Vader's head, making the final showdown between Vader, Luke, and Palpatine a lot more involved and interesting. 4/5 stars.

1. Episode III: Revenge of the Sith by Matthew Stover is the best movie novelization I've read so far, hands down, especially considering the mess of a movie it had to work from. The dialogue feels natural, the characters and their relationships are much better developed, the fight scenes are kickass, and the book really reads like a novel, not like a novelization. If you only read one Star Wars movie novelization, it should be this one. 5/5 stars.

Interesting that the weakest movie in each trilogy (in my opinion) produced the best novelization. Although I suppose that makes a bit of sense: if you've already got a good movie, there's not a lot the novelization can add and a whole lot it can take away; whereas with something like Episode III, there's nowhere to go but up.
Posted by Amy at 9:45 AM No comments:

Email ThisBlogThis!Share to TwitterShare to FacebookShare to Pinterest
Labels: book of the movie

A.K.A. "Why does this book exist?" Seriously, it's a novelization of a film adaptation of a novel. That takes balls. 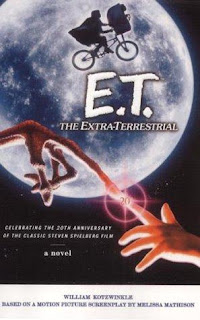 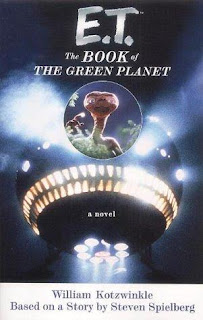 I am a Bad Library Patron

I mentioned in my introductory post that I used to read 250 books a year. So do my reading habits look anything like that now?

Short answer: No. I am far too busy pretending to work like a productive adult.

Long answer: Here is a general summary of my reading habits:

Day 1: Visit library to pick up one book, ostensibly to review for work (so I can feel like a productive adult). Can't find that book. Pick up six or seven other books instead.

Day 2: Look for the book I originally wanted on BookMooch. Find it. Also find a dozen other books that seemed cool at the time. Wipe out my BookMooch credits.

Day 3: Remember that I should start reading my library books. Pick a book at random and start reading. Get through 50 pages before realizing I left my computer on. Get distracted for rest of night by compulsively reloading email and various blogs.

Day 10: Book I requested from BookMooch comes in mail. It doesn't fit in my mailbox, so I have to pick it up at the post office.

Day 13: Begin reading the book I got in the mail. Realize it is ruining my pleasant memories of when I read that book as a kid. Decide not to review it after all. Watch a Law & Order marathon instead.

Day 14: Realize I never started reading my library books. Renew them all online, then promptly forget about them again.

Day 18: Am reminded in a random conversation of a book I already own and must read it right! now! Search bookshelves. Realize it is not in my apartment, but boxed up in my mother's basement.

Day 19: Call mother; ask her to go through basement.

Day 35: Finish one library book. Like it so much I go to the library to check out the sequel. Read that, too.

Day 42: Remember that I have other library books and they are due. Try to renew online, but have done so too many times already.

Day 43: Go to library to renew books in person. Sheepishly pay overdue fines with pennies I found at the bottom of my purse.

Next question: Is this an exaggeration?


Short answer: A little bit. But not as much as I wish it were.
Posted by Amy at 3:11 PM No comments: